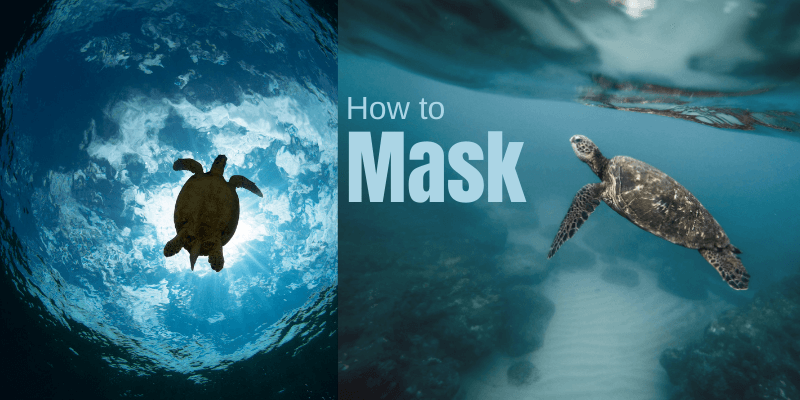 Layer masks in Photoshop are an incredibly useful tool. Unfortunately, some folks get scared off because they don’t understand how they work.

Hey there! I’m Cara, and through my work as a photographer, I can attest that masks are AMAZING!

But, I get it. Masks were intimidating to me at first, too. It takes a bit to wrap your head around the concept. But, once you do, you’ll be awed by the magnificent mask as well.

Let me show you how they work!

Why Use a Mask?

One of the best reasons to use masks is that they allow you to make non-destructive edits. For example. Take a look at these two turtles I have in this image. For example, let’s remove part of the image on the left so that it isn’t covering up the turtle image on the right.

You could crop the layer using the Marquee tool or another selection tool (see detailed explanation here). However, that would be a destructive edit because it irreversibly deletes the pixels. In other words, if you make a mistake, you can’t go back and adjust it later.

(I know you can undo, but I’m talking about after you’ve made other edits, then notice the mistake. Photoshop only tracks a certain number of adjustments so you might not be able to get back to it. Plus, you would have to undo everything you did in between).

You could also use the Eraser tool, which people like because it is a simple tool to understand. It works just like a pencil eraser and we can wrap our heads around that.

But, it has the same problem. Just like a pencil eraser, the edit is destructive. Once you’ve erased the pixels, they’re gone and you can’t get them back.

Using a layer mask, however, is a non-destructive edit. Let’s look at how it works.

Let’s set up a demonstration so you can see how this works.

With the top image layer selected, in this case, the green turtle, click the layer mask button at the bottom of the Layers panel. It looks like a rectangle with a circular hole in the center.

A white layer mask appears linked to the green turtle layer. In a minute we’ll talk about how a black layer mask works.

The Colors of the Layer Mask

Don’t worry if you’re lost, this will make sense in a minute.

To switch between the two colors you can press X on the keyboard or click the 90-degree arrow above the boxes.

Painting with the Layer Mask

So we’re working with a white layer mask. Let’s start painting to understand what happens.

Hit B on the keyboard to switch to the Brush tool.

White reveals and black conceals. We want to remove parts of the green turtle image so we need to conceal them. Make sure the foreground color is set to black (the black square needs to be in front).

Now, start painting your image with a brush. Everywhere you pass the brush, the image is being erased.

Let’s say you make a mistake and remove part of the image that you don’t want to remove.

No problem! Simply hit X to switch the foreground color to white. White reveals, so when you start to paint you’ll be bringing back the image.

You can do this at any point, even after you’ve made dozens of other edits and can no longer undo your moves. It even works if you’ve closed the image as a PSD and reopened it later. There’s no information to undo, but you can still bring back the image with the layer mask.

Layer masks also work in reverse, which is helpful in some cases.

Remember I pointed out earlier that we were working with a white layer mask? Now it’s time to see what happens with a black one.

Hit Ctrl + I (Command + I on a Mac) to invert the layer mask and turn it to black.

Black conceals, so the green turtle image disappears. You can make it reappear by painting on the layer mask in white.

Notice the white appears on the layer mask thumbnail in the layers panel.

Remember what I said about how masks work in grayscale? White reveals and black conceals and gray does something in between.

For this example, we’ve chosen a lighter shade of gray. Check out what happens when we paint on the image with a black layer mask.

See how the effect is more transparent?

I hope this explanation has helped you wrap your mind around how layer masks work. But, you might not fully understand the implications until you put layer masks into practice.

Grab some images and start playing around. I promise, play with them long enough and you’ll hit an aha! moment where your mind will be blown by the awesomeness of layer masks.

Give it a go today!

Still need some help with the basics? Check out how to copy and paste layers in Photoshop here!

Welcome to PhotoshopBuzz, a resource hub where you’ll find everything about Photoshop, from the most basic tools, general how-to tutorials, software & design tips, to freebies. Read more about us here.